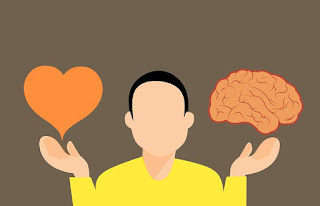 In counseling, we often see the extremes of personality traits.

We often see the extreme “logical thinking folks” who have struggles with the feelings, AND

We often see the extreme “emotional feeling folks” who have struggles with the logical, rules and boundary setting part of their lives.

If not careful, they tend to swing from one end to the other leading to emotional exhaustion at times.

The aim is to give these folks the emotional literacy to fully understand and fully accept themselves for who they are, and then scaffold their weaknesses or “fill in the gaps”.

CBT (Cognitive Behavioural Therapy) is probably more logical and thinking based in its approach.

ACT (Acceptance Commitment Therapy) is probably more feeling and “value based” in its approach.

We use both to help “bridge the gaps” for these folks. In essence, we aim for them to become more “bilingual”, and integrate their thinking and feeling minds for better functioning and adaptation.

Without those abilities, they may be in a state of frequent inner conflict and disharmony.
Posted by Perpetual Health at 3:35 PM